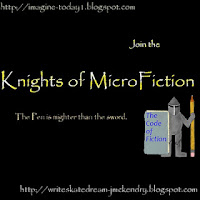 Knights of Microfiction Entry (09-15-12)
Talia slammed the files down with such force that the stapler rattled and the picture of her three tow-headed children toppled over and fell into the trash can next to her desk.  I hunkered down lower in my tiny cubicle, trying to disappear.  She jerked open her drawers and dumped the contents into an crumpled, old copy-paper box.
I didn’t say anything.   She was past the point of conversation.
By the time she stomped over to the copier to snatch up her letter of resignation, I was just waiting for something to smash against the back of my head.
Talia hadn’t always been like this.  When she first started here, she laughed and joked so much that, by the time the work day had ended, my cheeks ached from smiling.  But that was a long time ago.  She hadn’t smiled in months.  The joy had long since drained from her, and she was starting to drain it from The Others, too.
These moods--her “spells”--lasted longer now.  Before they had lasted just an hour or two; now they stretched out into weeks and months.
This was a hazard of the job.
It was known.
No one stayed in that position for more than a year or two.  The job used them up and spit them out.  I will give her credit, though; she lasted longer than most of them did.
The Others were glad to see her gone.  They could feel her draining their resources.  Those who came into contact with her seemed to depart with a worn look about them.  With slumped shoulders they would trudge back down the hall, their eyes devoid of any spark.  It seemed almost contagious.
It became clear that there was no alternative.  She would have to be Repurposed.
The Others met in their pristine board room and nodded in agreement, making the decision official.   When I heard the news, I tried not to smile with relief.  But I did, and that must have been the final straw for her.
I really wasn't surprised when I felt her chair crush against my skull.  I had been telling The Others for months that she was no longer stable.
In the end, they agreed.
When the authorities finally came to remove her and transition her to a Repurposed Ward, and The Others all heartily agreed that she was no longer stable.  They nodded and murmured and said, “Quite right.”
In fact, that was the last thing I heard before I slipped into the darkness and their voices faded away.
“Talia seemed to be in an especially bad mood today.”
“Quite right.”
_____________________________

Ok, so this my first attempt at microfiction with this group.  (Hey, Jess!)  This isn't actually in my WIP, but it does utilize two of my characters and it does allude to a certain situation that occurs in the WIP.  Time actually does NOT behave predictably in certain locations in my WIP, so I thought I would steal elements from my story and use it for this:


After all this time, there it was…no longer swaddled in a blanket, or buried in time or earth, but right there in front of me...staring at me with eyes that neither judged nor acknowledge me.  I looked at it…at him…and braced myself.
“You look like your father,” I murmured.  When he didn’t answer, I fumbled for an explanation.
“I thought you were dead,” I sobbed.  “I was only gone for a moment--just a moment.  I didn’t understand how it all worked then.”
He looked at me silently from the shadows; I pressed on, desperate for him to understand.
“Time…it doesn’t act the same There.  I was only gone a minute—I swear!  I never meant for a minute to take so long…”
Nothing.
“I went in to try and save him!” I screamed, “That place was killing him—devouring him.  I didn’t know it would cost me you!  When I came back and saw him holding you.  You didn’t move…I thought--”
He emerged from the half-light and drew nearer.  I smiled and stepped forward, eager to meet my son.
He bent down, and I offered him my cheek--tears streaming down it.
“You are nothing to me,” he whispered into my hair.
“I thought you were dead,” I wailed.  “They took you from me!  Don’t you understand?  I didn’t know!”
But my baby was already gone—slipped back through the worn edges of time.  The cave’s corridor had swallowed him, as it had so many years ago.