Give Me My Silence

I cannot write with music playing.  On a good day, I can block out the sound of the television--but definitely not the television and the dishwasher and kids playing.  My brain can only block out so much, and then it all comes crashing in, overwhelming me, suffocating me.  Apparently, it is a form of Auditory Processing Disorder.

I have always known that I was not an auditory learner.  I need to see things, to touch things in order to properly commit them to memory.  Things that I merely hear quickly evaporate into the ether--not because I am not listening, or because I do not care, but because that is how my brain works.

But things I read or write...well, they are ingrained in my mind for all time. 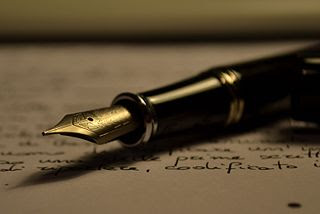 I never noticed a problem with this while in school.  I never received low grades or strained to learn.  No, I always took meticulous notes and read and re-read them.  I never sat still during lectures; instead, I spent the hours scribbling away the key bits so I could commit them to memory later.  Apparently, even at an early age, I found a work-around--without ever even realizing it.  Perhaps I simply knew my strengths.

I grew up in a very quiet house.  A product of the 70s, I was a "latch key kid" and spent a lot of time alone.  Alone was quiet.  So, I only realized I had a problem later in life, when my three kids became old enough to create a constant low-roar in our home.  This--combined with the rattle of the dishes washing, the churn of the laundry swishing around the washing machine, the clatter of cats chasing one another through the house, and the hum of the television that no one seemed to be watching--it all seemed...too much!  It was overwhelming.

Strange that so many noises, which if taken on their own might be considered soothing, or lulling, when combined seem to rankle, to jar, to agitate.  Yet, they do...for me at least.

When people talk about listening to music when they write, I shudder as I imagine one more noise that I must try to block out in order to hear my own thoughts.

By all means, crank up the music if that helps you.  But for me...give me my silence.  The quiet of a cold winter's night, the gentle whispers of my characters, and the tapping of my keys to keep me company while.  Somewhere, in another room, the rhythmic breathing of sleeping children can be heard faintly.

This gentle, near-silence surrounds me with peace.

What about you?  Do you listen to music when you write?
Posted by Unknown at 10:24 AM 5 comments:

Email ThisBlogThis!Share to TwitterShare to FacebookShare to Pinterest
Links to this post
Labels: auditory processing disorder, latch key kid, noises, the sound of my thoughts, too much, writing in silence, writing with music

I finally finished an article I have been avoiding working on for several months, so I feel a certain sense of accomplishment.  These type of feats deserve a reward.  My reward-of-choice for today is rum cake!  So, at about 9:00 this morning, I helped myself to a large slab of alcohol imbibed goodness, ignoring the fact that I still have plenty more articles I need to work on, as well as my novel, and another (shorter) manuscript.

I have decided that, in order to survive this holiday season (and as a good rule of thumb, in general), I need to focus on what I have accomplished rather the pile of things still waiting to be done.  I am much happier (and easier to live with) when I change my perspective this way.  And, face it, the holidays can be a handful...a handful of relatives visiting, a handful of to-do lists, a handful of things still left to bake, or buy, or make.

We put the tree up on Thanksgiving night.  (Another feat that resulted in a hearty slab of rum cake.)  I baked plenty of goodies...all of which have already been devoured.  We all snuggled, and watched movies, and spends days on end in sweatpants.

All in all, there is a lot to be thankful for.

I am Not Dead Yet

I am not dead (knocking on wood).  I am a bit frazzled and overworked...but happy.  I have my novel, which I am still working on, and a new project that is not-yet-to-be-spoken-of, but perhaps soon...or never.  We shall see.

I am obsessing over Thanksgiving preparations, which can become a bit crazy when trying to accommodate no: gluten, milk, eggs, beef, pork, chicken, pecans, walnuts, garlic, pineapple, and too many other things to list.  I decided to take Wednesday off in order to start cooking early.  I didn't do that last year, and I regretted it horribly!

I made up a batch of Christmas Chutney last week, and my ginger headed son realized that he LOVES chutney.  (I am oddly pleased to find out that one of my children adore it as much as I do.  For some reason, it makes me stupid-happy whenever I find out that my kids and I have something in common, and I proudly tell them, "You get that from me.")

In the meantime, I plan to be puttering away in the kitchen and running errands like mad so that I can hibernate until next Monday.  I do not like getting out and about on Black Friday...the reality of that day is as ominous as it sounds: people pushing and cursing and ignoring traffic laws!

By the time you read this, I will be adding yet another item to my shopping list and contemplating whether I should use whiskey or sherry or cognac or rum in my fruitcake...or make one of each.  And no, I do NOT use candied fruit...real, identifiable dried fruit, thank you very much!

Oh, and I need to make my rum cake.  Rum cake is vital if I plan on making it through the initial holiday rush.  Perhaps I should make two....

Sigh...but then, I suppose all of this fretting is just part of my holiday tradition.

What are your favorite holiday traditions?