Sometimes themes reveal themselves to you.  A common thread becomes apparent in the tapestry of life, and you realize that Life, or the Universe, or God is whispering in your ear.  Sometimes this happens at all once.  A “Grand Revelation.”  But sometimes it sneaks up on you, skirting the perimeter of your life until, finally, it envelopes you and startles you out of your ignorance.

Things have been happening around me.  Not to me, mind you…but near me.  People have passed away, people have had their home and security threatened, others have had their health compromised, and some have decided to make good on promises they made to themselves and dreams long since abandoned.

I have slowly come to realize that the thread that links these events around me is the fact that they all can be traced back to the accumulations that build up in our life…for better and for worse.

Death, which seems to hover around me, results from the accumulation of time.  Those days that we are allotted fall away like pages from a calendar until finally there are no more pages left to pull.

I wonder how many days my calendar still holds.

A dear friend’s home was broken into.  Her life’s accumulation of things, and memories, and mementos were rummaged through, strewn about, and stripped from her.  So many irreplaceable things, lovingly picked out and arranged, the accumulation of a family’s life together...ripped away.

Others have succumbed to illnesses both big and small.  Viruses and cancers and artery-clogging plaque accumulate within us, unseen to the naked eye...yet still taking a toll.

Another calendar page falls to the floor.

Fortunately, this is balanced out by the accumulation of hope and dreams and blessings.  Those who had previously given up on themselves now find cautious courage as they take tentative steps towards long-forgotten dreams.

And here, in my own world, at my cluttered dining room table, I sit at my computer and peck away.  The page-count grows, accumulating a bit more each day.

Keeping Food on the Table

Over the past year, I have had a lot of requests to read short stories, chapters, and entire book manuscripts.  And, honestly, I love reading them, but I realized I was spending more time working on other writers' books than my own.  I also realized that I was having trouble finding enough time to work on my freelance writing.

So, my desire to keep helping other writers, and to also keep food on the table, evolved into this:  Terri Wallace Freelance.

It gets better!  If you are a follower of my blog, I will offer my editing services to you through February 28th, 2013, at HALF OFF my regular rates!  If you are interested, contact me at gingerlovinmind(at)gmail(dot)com.

Email ThisBlogThis!Share to TwitterShare to FacebookShare to Pinterest
Links to this post
Labels: editing, food on the table, freelance, writing

I missed my blogoversary.  It was last week.  But last week is a blur...a really bad, really long and drawn out blur.

It all started Monday night.  I found out that my uncle died.  I had not seen him in quite some time.  He had been in prison.  He was my only uncle, or at least the only one I grew up knowing.  He was the one who told me stories, and grew gardens rivaled anything in a magazine.  I was married in his garden, near the bridge and just down the hill from the pergola, with a sound of a bagpipe wafting in the autumn breeze.  When his sister (my aunt) was murdered, it was he who drove with me back and forth to the courthouse several counties away.

I never got to say goodbye.  Not to either of them.  One moment they were here and, a moment passed and it was suddenly too late.  We always think there is time enough....

Then on Wednesday, my dad went into the hospital for tests and had some complications.  A series of telephone calls, and missed information, and driving around trying to find the right hospital.  He was admitted, and the immediate threat was taken care of...for now.

Thursday brought with it a dog attack on our cat (luckily, it seems it only used one of his nine lives, so all is well).

Friday was the funeral.  It was surreal and dismal and so totally not-a-proper funeral that I have decided that it was NOT actually his "real" funeral.  No, that will happen this spring when I can plant some rosemary (for remembrance) and gather my children around the grave to tell them stories of the great-uncle whom they will never remember but through the images I weave for them.  And weave I shall.

I arrived home Friday so very tired, and drained, and emotionally spent.  But then there was another call.  Another death.  This time it was another aunt...stolen away by illness.  She was gone nearly as soon as I had heard she was ill.  Another wordless goodbye.

So, amidst the plague of sorrows that had cloaked my house, I did not notice something else passing...time, milestones, and silent markers along this journey.  Hour blurred into hour and day into day.  Before I noticed, the whole week was gone and I was left too weary to care.

After many cups of tea, and many spontaneous hugs from children who can't quite understand why mommy is weepy, the moments stop bleeding together and start to resemble something familiar.  The fog begins to lift.

Despite my grief, still the world continued.

A year has passed since I started this blog.  Some goals have been met, and some are just now taking form.

A year has passed...but the journey continues.
Posted by Unknown at 7:24 PM 6 comments: 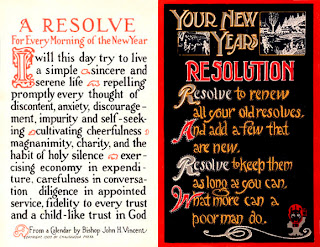 I do not tend to make resolutions.  I always mean to…I just never seem to have my thoughts collected by December 31st.  I still have visions of sugarplums, and remnants of “To Do” lists dancing in my head.  So, as far as resolutions go, I vow only to Read More, Write More, and Love More.  Anything beyond that is the cherry on top.

I have always been all about the journey, rather than the destination.  Because even once I get somewhere, I tend to be looking onward.  This is both a blessing and a hindrance.  It is wonderful to look ahead, but I do need to be reminded, at times, to stop and look around…to appreciate it all while it lasts.

I find that the month of January tends to result in lofty goals and aspirations, some which I end up achieving (almost in spite of myself) and others which I continue to aspire to, but all of which I am proud.

Last year, I got motivated to work on my novel.  And I am still working on it.  The past year has seen me make startling (well, for me, at least) amounts of progress on the novel.  It has seen the start of this blog (and, yes, my blogoversary is looming), and the start of my author Facebook page.  2012 allowed me to start making some money with my writing, and I have been blessed to see my words in print.  (And I am hoping that 2013 sees more of both!) [Knocking on wood.]

May it bring things worth quoting, and remembering, and sharing…and friends with which to carry on the journey.
Posted by Unknown at 1:20 PM 4 comments: