To Kill a Deadline 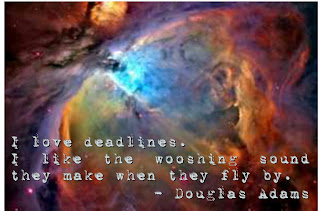 This is the quote that has sustained me the past few weeks as the realization dawned on me that there was no way that I could get the book finished before my fortieth birthday.  It should still be completed and available on Amazon by the end of the year—just not by the end of July.  I have fought against this truth for a couple of weeks.  I had hoped that getting the new computer might be able to push things forward.  And it has, but there is still only so much time in the day.
To be honest, for a day or two I felt like a failure.  I typed furiously and logged several thousand words each day.  Then yesterday…I hit the wall.  I was exhausted—mentally and physically.  Then I realized that this deadline was of my own making, and it was within my power to un-make it.  If it takes me a few more months to create the book I want, a book I can be proud of, then so be it!
This revelation was helped along late last night when I was absorbing some or other television show about Harper Lee and wallowing in my writer’s guilt.  (Luckily, I recorded the show so I could watch it when I am less sleep deprived and guilt-ridden.)  The program mentioned that Harper Lee had finished To Kill a Mockingbird and it was with a publisher and they were working on editing, etc., but that it spent TWO YEARS in rewrites.  Yes, you read that right…even after actually having written the book, Harper Lee spent another TWO YEARS rewriting, tweaking, polishing, wordsmithing and otherwise honing the book to perfection.
Two years.  Two….years…
Suddenly my few extra months does not seem so insurmountable.  So, if you’ll bear with me, I will take the time I need to likewise hone and wordsmith.  And if I hear a familiar whoosh swoop past while I am typing, at least I can take comfort in the fact that I am in good company.
Posted by Unknown at 9:14 AM